Land-Use History in the Sagehen Basin

See the station’s timeline for sources.

With the retreat of the North American ice sheet 13,000 years ago, the northern steppe grasslands vanished as the sea and trees rose. Following hot on their heels, humans moved onto the continent for the first time, and immediately began managing the landscape.

By 1200 CE in the Sagehen basin, the Washoe tribe arrived seasonally to hunt and harvest before descending to milder climes for the winter. On their way out every year, they lit the forest on fire as their ancestors had done for thousands of years. The western forests adapted to this low-intensity, creeping fire, coming to depend on it to maintain nutrient cycling, to clear spaces in the understory, and to create productive habitat.

“The westward-moving hordes of humanity caught up in the California gold rush, historian Dale Morgan once asserted, ‘altered the course of history in so many ways that scholars will never trace them all‘.

On the local and regional level [like in Truckee-Tahoe], their impact was similarly felt. In a short span of years the native population was decimated, roads penetrated the wilderness, and mining towns dotted a landscape uninhabited by Euro-Americans just a year or two before.”

The densely-settled new inhabitants need for food and resources quickly strained or even wiped out native wildlife and plant populations.

This era marked the end of thousands of years of Native American sustainable management of the Sagehen forest.

In this era, most Truckee River headwater basins had at least one lumber mill. The extracted wood primarily went to Virginia City to support the silver strike as building material, mine supports, and fuel for the steam engines that replaced oxen and mules.

Banner Mill was the largest Truckee basin producer. Located between the Sagehen station and the front gate where the railroad used to cross the creek, Banner turned out 100,000 board feet of lumber every 12-hour shift.

In the 1870’s and 1880’s, Abner Weed also ran a fuelwood operation in the basin using the smaller trees and slash left after the logging. Abner left for Siskiyou County in 1889, where he founded the city of Weed, CA (presumably when the trees were gone from Sagehen).

The timber industry effectively denuded the region, leaving us with an environmental legacy of altered ecology that we are still struggling to return to function, sustainability, and resilience.

The US Forest Service formed in 1905 in response to the illegal pillaging of forested western public land by commercial logging and grazing interests. Sagehen became part of the system in the early 1930’s.

In addition to the management change, the 1930’s marked the beginning of regular data collection at Sagehen, with aerial photography and snow transects begun to evaluate vegetation cover and water supply. Geographical exploration in the region had previously occurred in 1902 when Leiberg mapped forest structure and fuel loads. Demonstrating the value of this kind of data collection, the 1960 Donner Fire outline was shown to correspond to the densest concentrations of mapped Comstock slash.

Trapped to extinction, the 1930’s also provided the last glimpse of the California wolverine, which followed the last California Grizzly bears and Gray wolves in the 1920’s.

As a division of the Department of Agricultural (USDA), the new Forest Service focused on managing the public forests for sustainable timber extraction and water yield; it was not about preserving habitat or aesthetic values. They managed Sagehen’s forest like a crop, suppressing fire to maximize yield, leaving the unmarketable wood on the ground, and neglecting all other forest values. And although the new Forest Service had inherited a badly damaged ecosystem, until recently their policies did little to reverse that damage and avoid the uncontrolled wildfire of our current era.

Sagehen Faculty Director, P. R. Needham was a stream insect specialist, hired from Oregon to help A. Starker Leopold begin the new UC fisheries and wildlife program that, depending on which story you believe…

For a field study site, Leopold and Needham settled on Sagehen Creek for its reasonably undisturbed hydrological condition, year-round flow, and naturally occurring side channels that allowed the pump-and-drain stream transects that Needham envisioned.

Along with the actual station construction and Leopold’s wildlife courses, these examinations of the creek fish and insect populations were a primary focus of the Station’s first 10 years.

“In the winter of 1951, representatives of the university and Forest Service skied out to the site. A handshake agreement was made that day, and an official Special Use Permit was signed on April 12, 1951, launching the station.”

A codicil in the agreement would prove helpful to the station’s survival in later decades: if the university ever abandons the station, they must restore the forest to natural condition. When you can’t afford to run a meager field station operation, you certainly can’t afford a multi-million dollar restoration project costing more than the total historical expense of the facility.

“One of Needham’s smart moves was to hire an experienced Swedish carpenter to head up the construction crew. That first summer, under Soder’s direction, the group built a small cabin, two tent platforms, and a storage shed. ‘There weren’t any plans,’ Glenn Flittner recalls. ‘P. R. would just sketch something out on a scrap of paper, and we’d go to work.'”

Soder continued building the Sagehen facility with P. R. for years, largely funded by the Max C. Fleischmann Foundation and the National Science Foundation. Fishhouse and diversion weir renovations in the 1970’s were funded by the storied San Francisco Flycasting Club, which still owns a lengthy stretch of land along the Truckee River beside I-80.

A fire history study conducted in 2005 cored Comstock-era stumps in the basin (which are much older than the living trees), establishing that prior to European arrival the mean return interval for fire was about 2.5 years. Post-contact, that interval rose to 24 years. The character of basin fire began as cool and creeping, recycling nutrients and thinning overgrowth, then rose to sterilizing and destructive.

In 1960, construction crews burning slash at the new I-80 at Donner Summit touched off the most intense fire in Sagehen history, which quickly spread up-slope and took off.

Other post-contact fires in the basin:

Sagehen’s sheep grazing allotment was not terribly profitable in later years, and the permittee did not exercise the grazing option after about the mid-1990’s. The Forest Service permanently withdrew the allotment in 2006 (or so).

Wyethia monoculture at various places in the basin still indicates areas that were over-grazed more than 25 years ago, but the stream corridor is fairly intact, since there was never a cattle allotment in the basin, as in adjacent Prosser Creek.

The camp used to buy a sheep from the herder every summer to BBQ on a bedspring over a fire. Apparently, “Gunther” beer was the camp’s preferred bargain brand.

Sagehen basin was impacted by the Sierra land checkerboard given to the railroads by the federal government to encourage them to build the transcontinental rail. This legacy has proven disastrous to forest ecology and management for water, fire, and wildlife.

The railroad sold these parcels to private developers who logged, grazed, leased water rights, and/or then built houses on much of the land. Several of these private inholdings owned by logging interests encroached into the Sagehen basin.

1. In 2005 as part of the Checkerboard Initiative, the Trust for Public Lands (TPL) and the Truckee-Donner Land Trust (TDLT) purchased a parcel owned by Croman Timber Corp. of Oregon in Independence basin that included a piece of the top of Sagehen basin. The Sagehen basin piece of that parcel was transferred to the Forest Service the following year.

2. The Nature Conservancy and a consortium of partners (including TPL and TDLT) purchased Independence Lake from NV Energy in 2010. Two corners of that boundary lap over into the Sagehen Basin, atop an old burn scar and plantation from the 1920’s.

3. Sierra Pacific Industries still owns two parcels within the Sagehen Hills on the south side of the basin. These parcels were logged in 2007, making them less expensive to buy. Working together as part of the Northern Sierra Partnership, the Truckee Donner Land Trust, The Trust for Public Land and The Nature Conservancy launched a plan to purchase Frog Lake, Red Mountain and Carpenter Ridge in 2020 for $15 million, including stewardship costs. When this happens, the ownership and land management of Sagehen basin will finally apply to a virtually intact watershed above Hwy-89.

4. The tiny protrusion on the right upper side of the easternmost SPI parcel belongs to a private land owner. 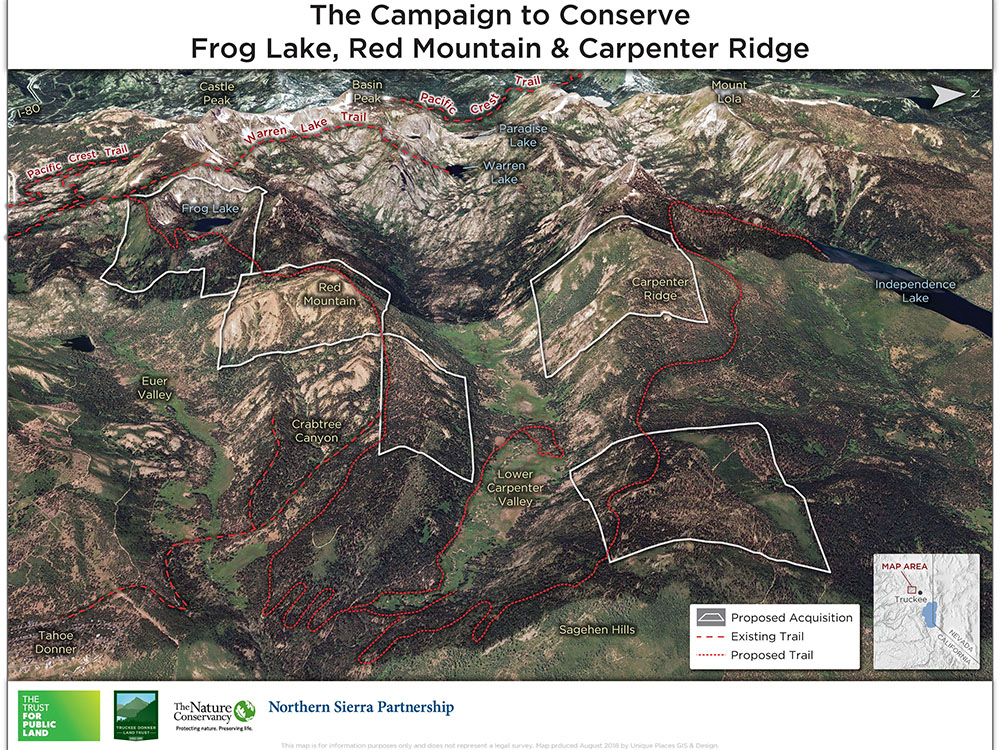 Sagehen basin is the area covering most of the right third of this image, between Lower Carpenter Valley and Independence Lake. More info here.